Cider Enterprises Book Club concluded Season Four on their April 20th conference call with featured author Dr. Lewis Baskins and Betty Muhammad, discussing his book “Uncover the Missing Peace.” And just like Tasha Cobbs expresses in her song, I’m gonna “Put A Praise On It” in appreciation for all of the authors, readers, listeners and technological support I received during this season.  I offer up praise in gratitude for the many creative thoughts and ideas I harnessed to showcase the great works of Season Four’s authors.  Each author had life-altering experiences that revealed their overcoming spirits.   To Asadah Kirkland, Kathleen Robinson, Carla L. Hawkins, Wanda Jenkins Clemons, Kajara Nia Yaa Nebthet, King Teasdell, Zakiyah Ameedah, Dr. Janice Fortman and Dr. Lewis C. Baskins – my sincere thanks to each of you. Your presence in this season met the goal.

END_OF_DOCUMENT_TOKEN_TO_BE_REPLACED

Season 4 Concludes: Learn methods to stem conflict & violence in self and others

Featured author Dr. Lewis C. Baskins, “Uncover the Missing Peace: Dissolve Resentment Avoid Anger” is the ‘prophetic’ closure to the Fourth season of the Cider Enterprises Book Club Conference Call.  On April 20, 2017, Dr. Baskins and Betty Muhammad will share their ‘over-coming’ techniques for stemming conflict and violence in ourselves, the family and the larger community.  They share proven methods to create peaceful co-existence. END_OF_DOCUMENT_TOKEN_TO_BE_REPLACED

On March 16, 2017, Cider Enterprises Book Club spotlights international speaker Dr. Janice Hooker Fortman and her book on difficult mother-daughter relationships and resolutions. Women in many areas of the world use this month to celebrate the extraordinary achievements of women and ensure that others are mindful of our importance.  The United States Congress passed Pub. L. 100-9 in 1987, declaring March as National Women’s History Month in perpetuity.  How do you acknowledge Women’s History month?  What pro-active women honoring endeavors do you engage in or know about?  We invite you to join us and share our relevant and timely conference call event with your network.

END_OF_DOCUMENT_TOKEN_TO_BE_REPLACED

A Month for Manifesting Miracles and Love

In light of the annual Valentine’s Day hoopla and romance energy that permeates the atmosphere, February – that sacred time of the Aquarius – is an opportune month for manifesting miracles and love. It is also the month we celebrate Black History and my birthday on the 11th (Yeah Claudette!). And because I am ever the romantic optimist and cheerleader for the underdog, it is imperative that I make room for joyful periods during the cold winter months. So, I am happy to announce that Cider Enterprises Book Club is featuring author Zakiyyah Ameedah (Zee) and her book, “Jamaica: A Memoir of Miracles, Manifestations, Love,” on the February 16th conference call at 7 pm.

END_OF_DOCUMENT_TOKEN_TO_BE_REPLACED

An Opulence and Abundance Theme of Published Writings in 2017

Happy New Year!  Twenty-seventeen (2017) is the year of expansion in the number of new authors.  This is exciting news for the Cider Enterprises Book Club Conference Call.  In fact, this year’s list of new authors will include me and brother-friend, King Teasdell.  Yes, we are going to unleash our own stories of “overcoming” the barriers that have delayed our publications.  We know that our truths about our lives and the barriers we eliminated will be encouragement for others who have stories waiting to be written and published.

I’ve been told that 2017 is the year of Opulence and Abundance, which reiterates my own heightened feelings about what this New Year means to me. Twenty-sixteen (2016) was the year of completion; and in the case of my book, I made the decision to get it done.  Near the year’s end, I was blessed with a nine day opportunity to work at my own pace, and committed several hours to writing each morning.  I set up my spiritual music in the background and was amazed at the results this devoted time produced.  The writing flowed.  After three or so hours passed, I took food breaks and walks for about 7,000 steps.  During this refreshing and invigorating time in nature, I had time to review and clarify what I had written earlier.  I concluded each of those days reluctantly reminding myself that “this is enough for now, go out and walk the last 3,000 steps to meet the daily goal”.  I eagerly returned home to get busy again with a renewed enthusiasm to tell my story.  My working title is “Instant Ain’t Everything” and is planned to be released in February.

END_OF_DOCUMENT_TOKEN_TO_BE_REPLACED

During this holiday season, Cider Enterprises Book Club is delighted to feature two authors of children’s books on the Conference Call this December 15, 2016 at 7pm (CST). Dial (218) 548-7622, access code 20112# to join the conversation and learn more about these inspirational children’s books and our guests Kajara Nia Yaa Nebthet, author of “Light as a Feather” and Wanda Jenkins-Clemons, author of the “Kwami and Kids” series. END_OF_DOCUMENT_TOKEN_TO_BE_REPLACED 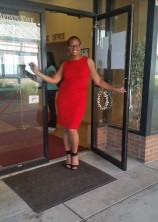 Carla L. Hawkins, author of “Mama Never Told Me,” is the featured guest for Cider Enterprises Book Club Conference Call on Thursday, November 17, 2016 at 7 pm CST.  Carla’s new release gives praise and an account of her ‘now’ just in time for this Thanksgiving season.  From the perspective that there were “things Mama should have told me, but never did,” Carla’s story pours out the trials and triumphs that operated her life over as a child though adulthood.

I personally know Carla as a Mother, Wife, acclaimed Actress, Educator, Producer of the Destination Manifestation Sunday evening prayer call, and a very valued member within my spiritual community.  Now as a first time author, Carla has once again shown me why she rightfully and respectfully is an over-comer.  I see this tall, beautiful, statuesque, humble and poised person as living proof that in spite of what Mama didn’t tell her, she discovered enough on her own to successfully maneuver her way to the truth of her being. END_OF_DOCUMENT_TOKEN_TO_BE_REPLACED

< Previous Next >
+ Add your own event Eventbrite